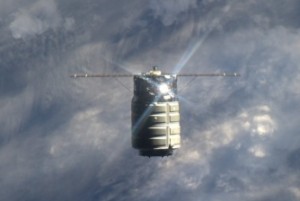 October 23, 2013: The Orbital Sciences Cygnus Demo vehicle successfully launched on an Antares rocket on September 18th from the Mid-Atlantic Regional Spaceport in Wallops, Virginia. Once on orbit, it performed a series of on-orbit flight demonstrations, then rendezvoused with and berthed to the International Space Station (ISS) on September 29th. After being attached to the ISS for a month, Cygnus safely departed on October 22nd and performed a destructive re-entry the next day, bringing a successful end to its maiden flight. Cygnus became only the second commercial vehicle to deliver cargo to ISS, and is expected to begin regular resupply missions to ISS in December 2013 as part of the Commercial Resupply Services contract between NASA and Orbital Sciences.

Odyssey engineers performed real-time support of demonstration mission objectives at Mission Control Center in Houston, working with both Orbital and NASA during the entire mission. Odyssey’s role in Orbital development was extensive, including System Engineering design support, Concept of Operations development, Robotic Capture design and analysis, and Independent Verification and Validation of all safety critical software. Congratulations to the entire Orbital and NASA team!
For more images and details about the historic Cygnus mission, go to:
http://www.orbital.com/AdvancedSystems/CRS