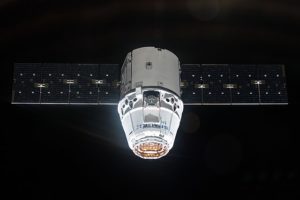 July 2, 2018: The unmanned Dragon cargo resupply vehicle successfully reached the International Space Station (ISS) this morning on its fifteenth trip to the orbiting outpost. Flying for NASA under the Commercial Resupply Services contract, SpaceX’s Dragon launched from Cape Canaveral atop a Falcon 9 rocket on June 29th, reaching ISS after a three-day rendezvous. It was captured via robotic arm today at 10:54 UTC, completing the first portion of its mission.