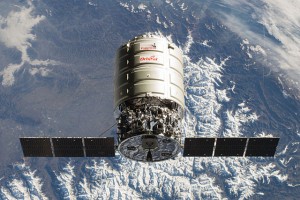 February 19, 2014: The Orbital Sciences Orb-1 ISS resupply mission ended successfully today with the destructive atmospheric re-entry of the Cygnus “C. Gordon Fullerton” spacecraft. After remaining attached to the ISS for approximately five weeks, the Cygnus was unberthed by the on-board ISS crew and released from the Station’s robotic arm at 11:42 GMT on February 18, 2014. After a nominal departure sequence, the Cygnus left the vicinity of the ISS as planned, carrying over 1,400 kilograms of trash for disposal. All deorbit burns proceeded nominally, culminating in a smooth atmosphere entry interface over the southern Pacific Ocean. Final loss of contact with the Cygnus during its fiery re-entry occurred at 18:23 GMT on February 19, 2014, successfully concluding the first of eight Commercial Resupply Services (CRS) missions to be flown by Orbital Sciences. Congratulations to the entire Cygnus team!

Odyssey’s support role for Orbital’s Cygnus development was extensive, including System Engineering design support, Concept of Operations development, Robotic Capture design and analysis, and Independent Verification and Validation of all safety critical software. For more information on the Cygnus and the Orb-1 mission, go to the Cygnus website at:
http://www.orbital.com/AdvancedSystems/CRS