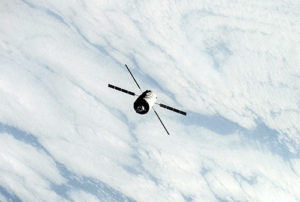 February 15, 2015: The European Space Agency’s fifth and final Automated Transfer Vehicle (ATV), known as “Georges Lemaitre”, completed its resupply mission to the International Space Station (ISS) today, marking the successful end to ESA’s ATV program. The ATV was launched into orbit on July 29, 2014 via an Ariane 5 rocket from Kourou, French Guiana. After performing a fly-under of ISS on August 8th for a relative navigation sensor experiment, it reached ISS and docked to the aft port of the ISS Russian Segment “Zvezda” module on August 12, 2014. After a successful six-month attached phase that included multiple reboosts of ISS and many other operations, Georges Lemaitre undocked and burned up harmlessly in the upper atmosphere over the Pacific Ocean at 18:04 GMT on February 15, 2015.

As with all previous ATVs, Odyssey supported the entire Georges Lemaitre mission through its work with NASA Johnson Space Center.

Congratulations to the entire ESA team on the conclusion of this decades-long program! For more information about the ATV or its five successful missions, please visit the ATV website: http://www.esa.int/Our_Activities/Human_Spaceflight/ATV