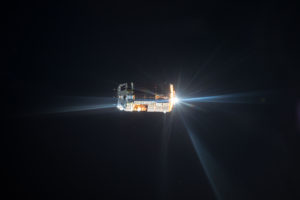 Odyssey personnel supported from the Mission Control Complex at Johnson Space Center in Houston, TX throughout the rendezvous and capture. HTV-5 will remain attached to ISS for approximately a month before departing for a destructive atmospheric re-entry. Congratulations to the entire HTV team!

For more information, visit the HTV-5 mission website at: http://iss.jaxa.jp/en/htv/mission/htv-5